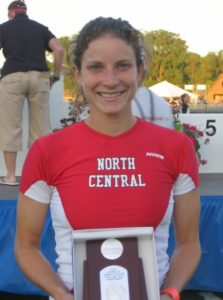 Megan Rossi-Bremer (DGS class of 2003) has been elected to the DGS Athletic Hall of Fame. Megan was a two time All-State performer in track & field as a member of the 4x800m relay and the pole vault.

Megan was an individual state qualifier in the 800m run and the anchor leg on the all-state 4x800m relay team in 2002. She also held the indoor school record in the 800m until it was recently broken 2 years ago. 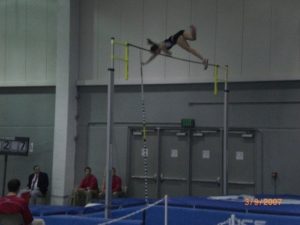 Megan went on to compete at North Central College in Naperville where she won NCAA DIII national championships in the pole vault twice (2005 & 2007).  In 2007, her vault of 12’11.5” set the DIII national record.

Megan also ran on the varsity cross country team and was the homecoming queen her senior year.

Megan is currently a teacher at Winnebago Middle School in northwest Illinois and coaches the pole vaulters at Winnebago High School. She is married to Jacob Bremer and is also the mother of three. Hall of Fame induction will take place on January 28, 2017 prior to the tip off of the boys varsity basketball game at approximately 5:45pm.