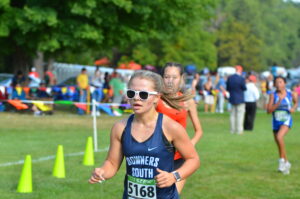 The Frosh-Soph team placed 16th, led by Greta Paschall (So) in 54th and Claire Posmer (Fr) in 65th. Kate Dziewinski (So) led the next 5 Mustangs into the chute. They were all within 60 seconds of each other with Mar Duran (So), Lena Baker (So), Elle Watson (Fr), and Jacie Selig (Fr) completing the DGS line-up. 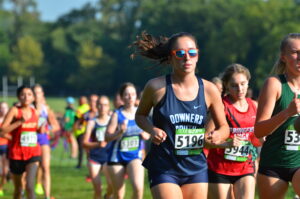 In the JV race, Sophia Nelson (Jr) led the way with her 50th place finish. Madelyn Sumlin (Sr) and Maddie Bodem (Fr) were the next finishers for DGS. They were followed closely by Anjali Kota (Sr) and Gabija Dauderis (Fr) to complete the scoring.

Two days later, on Monday, September 19, about half of the DGS team traveled to Wood Dale Forest Preserve to take on WSC Gold rivals Addison Trail and Willowbrook. Mar Duran (So) led the Mustangs as our top finisher for the 2nd Monday in a row. Lena Baker (So), Elle Watson (Fr), Anjali Kota (Sr), and Madelyn Sumlin (Sr) made up the top 5 scoring positions for the Mustangs.

Individual times and splits for all DGS athletes can be found the Schedule/Results page. The Mustangs compete next on Friday, September 23rd in Geneva at the Northwestern Medicine CC course in the Naperville Girls Invitational.