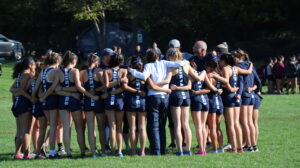 On Saturday, October 16th, the DGS girls cross country team traveled to Leyden HS for the WSC Gold Conference championship meet. The Mustangs came into the meet as heavy favorites and didn’t disappoint. DGS runners won all 4 of the individual championships and 3 out of 4 team championships, including the 23rd consecutive varsity team championship. It was a beautiful day to run with cool temperatures and a slight breeze, and the Mustangs took advantage of it. Out of 44 DGS girls who raced, 26 of them ran season best times and 15 Mustangs ran lifetime bests! Equally impressive, 27 DGS girls earned all-conference honors over the 4 levels competed!

The freshmen started off the meet with a somewhat depleted line up. With a couple of top runners sidelined with injuries, Mar Duran (Fr) stepped up to lead the team. She sprinted to the lead right from the start and never looked back. Mar spent the next 20 minutes increasing her lead, finally entering the chute with a 30 second PR time of 21:29 to take first place. Ashley Cotner (Fr) ran a 60 second PR time of 22:50, to take 8th place overall. Both Mar and Ashley earned freshman all-conference honors. Juliana Conyer (Fr), Raina Murphy (Fr), and Ella Gawlick (Fr) completed the DGS scoring in the freshman race and helped DGS to finish in 4th place.

The sophomore team took the stage next and came away with the first team title of the day. Much like the previous race, Sophia Nelson (So) took the lead right away and pulled away from the entire field to win the race. Impressively, Sophia’s time of 20:39 was 2 full minutes ahead of 2nd place. Abbey McGinley (So) and Liz Laverty (So) ran among the chase pack for most of the race. They eventually finished 3rd and 5th overall with times of 22:58 and 23:27.  Lilliana Jaeger (So) and Grace Stapleton (So) ran together for much of the race and ended up in 12th and 14th places to seal the team victory. Cate Willard (So) joined the other 5 Mustangs to earn sophomore all-conference honors with her 16th place finish.

The next race was the varsity championship. The Mustangs came into the meet ranked 6th in the state and ran like it. Despite resting top runner Sophia McNerney (Sr) for this meet, DGS was still able to take the first 4 places and 7 out of the top 8 finishers in the race. Holly Johnson (Fr) finished her first high school regular season with her 2nd invitational win. Holly moved to the lead right at the start and continued to pull away. She crossed the line for the win in 17:23.  Kelsey Casella (Sr) ran a similar race in 2nd place as she separated herself from the field early on in the race. Kelsey’s time of 18:23 earned her varsity all-conference honors for the 3rd year in a row. Madi Sisson (Sr) and Nora Joy (Jr) worked together throughout the entire 3 mile race. Running side by side, Madi out leaned Nora at the line to finish 3rd and 4th in identical 19:04 times. Rachel Rodi (So) led the Mustang trio that followed close behind in 6th, 7th, and 8th places. Rachel ran 19:20, while Sophie Ring (So) and Alex Spang (Sr) both ran 19:26. All seven varsity runners earned all-conference honors as the team took the championship! McNerney will join back in and strengthen the team as we start the state series with the IHSA Regional meet hosted by Sandburg HS.

The final race of the day was the JV championship. Our junior and senior athletes kept the ball rolling with a dominating performance that found 12 Mustang runners earning JV all-conference honors. Madelyn Sumlin (Jr) and Elizabeth Culcasi (Jr) took turns leading the race for the first 2.5 miles. Madelyn eventually surged to the front and took 1st place in 20:03. Unfortunately, Elizabeth fell and was unable to finish the race, but that didn’t stop DGS from take the next 9 finishing places. Ariana DeLeon (Jr) ran close behind Madelyn and had a great kick to finish 2nd in 20:07. Lindsay Spear (Jr) ran a strong 3rd mile, moving up in the field to finish 3rd overall in 20:16. Skyler Tomecki (Jr) ran well to finish 4th in 21:01 followed closely by Sara Homberg (Sr) who was 5th in 21:09.  Madolyn Werner (Sr), Renee Kowalski (Sr), Emma Lopez (Sr), Angie Hernandez (Sr), Peyton Horazy (Sr), and Anjali Kota (Jr) came into the chute in places 6th through 11th. Bella Lapacek (Sr) was the final JV all-conference finisher for the Mustangs with her 13th overall place. All in all, DGS scored a perfect score of 15 points to win the team title!